Prosecco is an Italian-style sparkling wine, made from Prosecco grapes (known as ‘Glera’ in Italy).

Prosecco is typically characterized by a high acidity, with pear and peach, apple and often citrus and almond notes. It has a slightly lower alcohol and sugar content than its Australian and French sparkling counterparts.

The Prosecco grape thrives at a high altitude, in a climate characterized by warm summers and cold winters. Its home is in the Veneto region of North East Italy.
In Australia, one of the places where this grape variety performs brilliantly is the King Valley, in North East Victoria.

Prosecco has a light bead or bubble, is extremely versatile, working perfectly as an aperitivo, and also with seafood, with spicy Asian foods, and with cheeses and desserts. 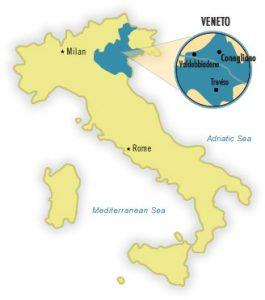 It is also the basis for the hugely popular Aperol Spritz, as well as the Bellini, created at the legendary ‘Harry’s Bar’ in Venice.

Prosecco is typically made using the Charmat method, meaning it is twice-fermented in steel tanks, and then bottled. Prosecco is designed to be enjoyed straight away, retaining its green-apple freshness.

Italian Prosecco can includes other grapes than just Glera, including Bianchetta Trevigiana. The region in Italy known now as Conegliano Valdobbiadene Prosecco Superiore DOCG, is home to the best of the best, with this Prosecco being produced in 15 towns within one province, where steep hills prohibit the use of machinery and most of the grapes are picked by hand.

It is suggested that the long and complex geological history, great diversity of microclimates and soil types in the area translate directly into a greater diversity and character in these wines (according to the U.S. Ambassador of the Consorzio of Conegliano Valdobbiadene, Alan Tardi)